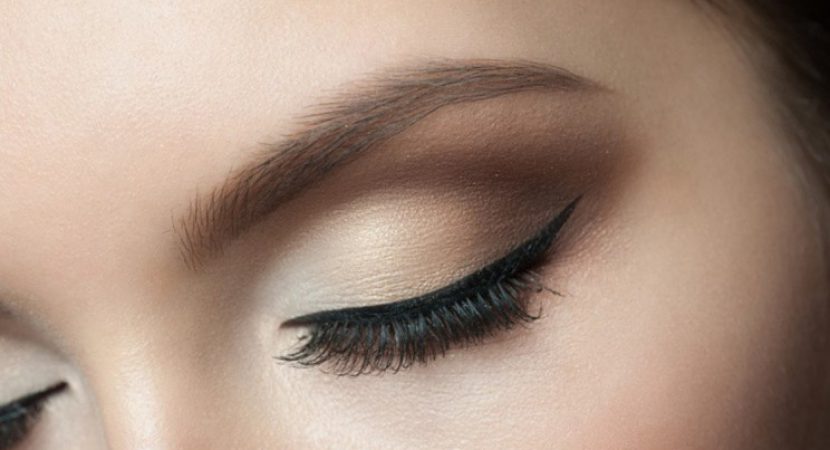 How to match eye line with shape of the eyes? And how to make our eyes look bigger and prettier using only an eyeliner?

Eyes are set wide when the distance between them is longer than the length of an eye itself. Obvious is it, that the aim of makeup will be to bring the eyes closer to each other. For that reason, it is suggested applying the eyeline right from the inner corner of the eye. Actually, we can fill the corner of the eye with a black eyeliner as well. The eyeline should stop right before outer corner of the eye. Basically, its end cannot move forward the very area because this will produce even wider distance between the eyes.

In this case the distance between eyes is shorter than length of an eye. Therefore, due to the eyeline we have to create an illusion of a wider distance between our eyes. Start applying the line somewhere in the middle eyelash root line and lift it slightly up at the end.

We are dealing with droopy eyes when above the crease area creates a fold of skin that overlaps eyelids. As a consequence, eyes look as if they were sad, tired and swollen. The eyeline has to be applied in such a way to balance the centre of ‘gravity’. With this in mind, start from the centre part of eyelids and then stretch the line along eyelashes. It is also a good idea to lift the line a little bit higher than just leading it along eyelash line.

Eyeline for Round Eyes

Here, we have to make eyes a little bit flattened, trying to obtain an almond-shaped eyes. The line should start from the centre of eyelash root line as it should stop somewhere slightly further than the outer corner of the eye. It is also crucial to make the line thin at its starting point and become wider at its end. As a consequence, we flatten out the middle part of eyes and widen its outer part.

Narrow eyes need to be made more round. Therefore, we have to draw a kind of an arch right above eyelid’s middle part. The line has to be applied right above the iris and has to be lifted in such a way to make the line bolder in the middle of its length. What is more, the line has to get narrower again at its end. The end of the line might be lifted up if our eyes are small. In a case our eyes are big, we can avoid this.